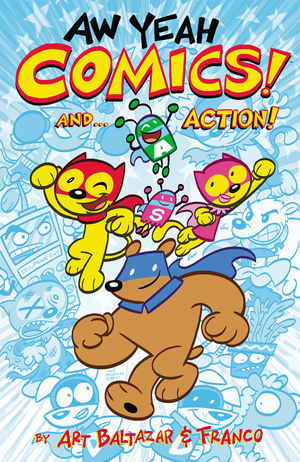 Aw yeah internet! Today is a good day to swing by your local comic shop. First, because it’s new comic day (so shouldn’t you be going anyway?) and second, because today is the official release of the trade paperback Aw Yeah Comics! And… Action! from Dark Horse collecting issues 1-4 of this super-fun comic series!

For the uninitiated, Aw Yeah Comics! is an all-ages friendly anthology comic featuring a world and characters created by the oh-so-awesome Art Baltazar & Franco Aureliani (of Tiny Titans and Itty Bitty Hellboy fame). Each issue of Aw Yeah Comics! features multiple short stories created by a rotating team of really great artists and writers (including a little something from me). The original single issues of this comic were funded through Kickstarter, with a successful campaign bringing in over THREE TIMES its original goal. This series is the publishing side of Art and Franco’s comic shop, Aw Yeah Comics in Skokie, Illinois which they co-own with my friend (and real life super hero) Marc Hammond.

I was lucky enough to get to hangout with Art and Franco at this year’s San Diego Comic-Con and Eisner Awards ceremony, and can personally attest to these guys being ridiculously cool on top of being incredible cartoonists and storytellers (true story).

To celebrate the release of this awesome collection, here’s an unused pin-up I did for Aw Yeah Comics a while back: 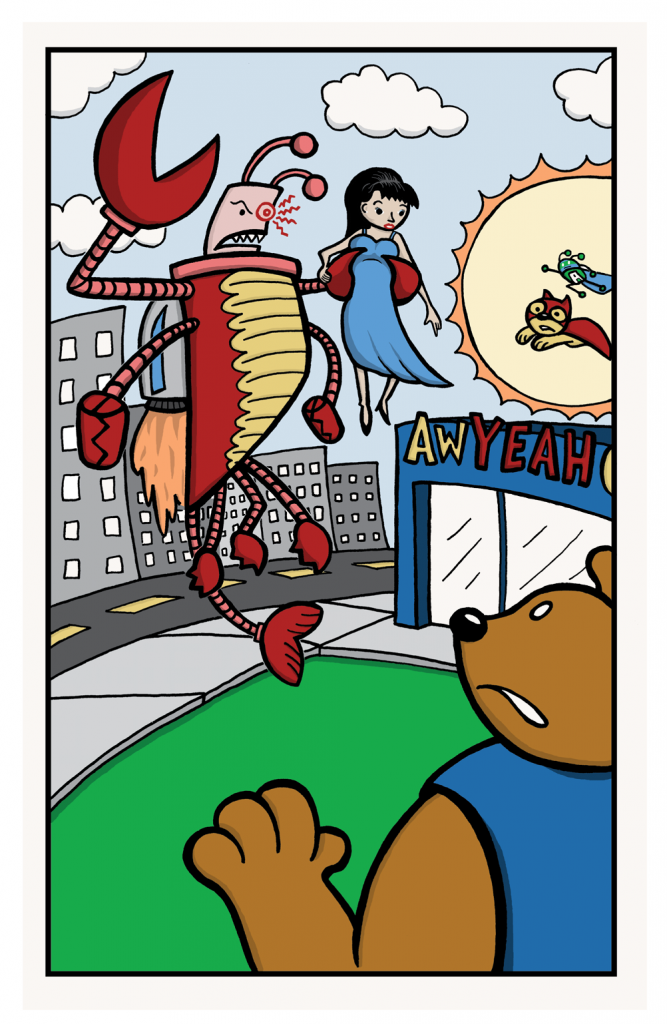 The big red villain in the pin-up is Marquaid, whose name is a little “wink” at the friend and business partner of Aw Yeah Comics, Mark Waid. Back when I was asked to draw the pin-up for Aw Yeah it was announced that Mark Waid would be writing my favorite comic character, the Rocketeer, for IDW. Before the release of that series Mark had mentioned he’d be introducing a new potential love interest to compete with Betty for Cliff Secord’s affection. With all that news fresh on my mind, I thought it would be funny to include a little “wink” in my illustration. So… in the finished drawing we see Marquaid swooping in on a rocket pack and kidnapping a woman who just happens to resemble the Rocketeer’s longtime girlfriend in the comics, Betty (even down to the sexy blue dress from Cliff’s New York Adventure #1). Get it!?! (rim shot)

Well, even if you don’t, I thought it was funny at least. Even if the reference was so obscure it took a whole paragraph on my blog to explain…

Anyways, be sure to pick up “Aw Yeah Comics! And… Action” at your local comic shop; and if you haven’t already, be sure to check out “The Rocketeer: Cargo of Doom” by Mark Waid and Chris Samnee.